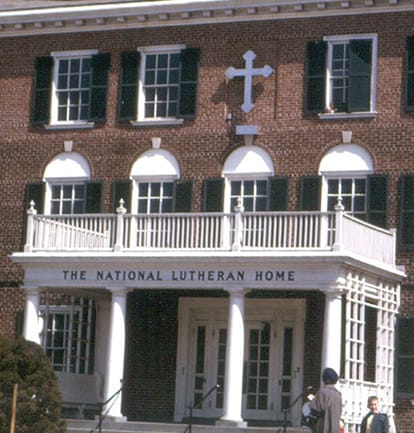 Meet our Board of Directors

The Board of Directors for The Village at Orchard Ridge share a devotion to the ministry, guiding our growth to ensure that our community is a retirement destination for new generations. As NLCS President and CEO Cyndi Walters said, “The Board doesn’t just meet in a Board Room. They are out in the community, speaking with neighbors and seeing for themselves opportunities for improvement.” To learn about the Board of Trustees for our parent organization, National Lutheran Communities & Services (NLCS), click here.

Rev. Nathan Robinson is the pastor of Emanuel Lutheran Church in Woodstock, Va. He holds a Master of Divinity (M.Div.) degree from Boston University School of Theology. Pastor Robinson's accomplishments have been in the oversight of expanding faith, attendance, and programs while at Emanuel. He has served as treasurer to the Woodstock Chamber of Commerce and was also named Citizen of the Year for Woodstock by the Chamber. Within the life of the Virginia Synod, Pastor Robinson has served on the committee of discipline for the Virginia Synod, as well as chosen as a representative to be trained in mission redevelopment for the Virginia Synod. He currently serves as a member of the Virginia Synod's Stewardship Table. In addition to his passion for family and the church, you may find him in his "free time" on the golf course. He and his wife Kylene reside in Woodstock and have one daughter.

Catherine R. Philips (Cathy) is a Community and Civic Leader who currently serves as the Education Chair of the Winchester Medical Center Auxiliary Board while, at the same time, is a member of the Junior Century Club and the Little Garden Club of Winchester. Previously, Ms. Philips has held numerous officer, board and committee member positions with Quota International of Winchester, Chatmoss Country Club, Piedmont Arts, The Martinsville Garden Club, First United Church, the Macon (Ga.) Symphony Orchestra and the Oxford College of Emory University.

Matthew S. Akers is a founding partner of McCarthy & Akers, PLC, where his practice focuses on civil and commercial litigation, appellate law, construction law, contracts, and real estate, including planning and land use, and zoning.   He also serves as the Town Attorney for the Town of Mount Jackson and is the general counsel to many non-profit and for-profit organizations.

Mr. Akers received his J.D. from the Ave Maria School of Law in Ann Arbor, Michigan where he served as Executive Solicitations Editor of the Ave Maria Law Review. After graduation from law school, Mr. Akers clerked for the Honorable James L. Ryan, United States Court of Appeals for the Sixth Circuit. He earned his Bachelor of Arts degree from Christendom College in Front Royal, Virginia, where he majored in Philosophy with minors in Economics and Theology.

Ms. Lisa Behr serves as a board member for The Village at Orchard Ridge. Previously, Ms. Behr was chair of National Lutheran Communities & Services' (NLCS') Board of Trustees. Ms. Behr is currently an owner/manager of both residential and commercial real estate with Greenfield & Behr Residential located in Winchester, Virginia. Ms. Behr is also an owner/manager of both residential and commercial real estate. From 2004 through 2009, Ms. Behr has earned the BRAR President’s Award and ERA Leadership Team Award.  In 2009, she was named First in Service by ERA Real Estate, earning the prestigious Jim Jackson Memorial Award.  Her certifications include, Accredited Buyers Representative, Cartus/Affinity Certification and Senior Real Estate Specialist.

She is a member of Grace Evangelical Lutheran Church, Women’s Philanthropic Educational Organization (PEO), supporter of the Winchester Royals Baseball Team and the Blue Ridge Association of Realtors Educational Committee.

Ms. Behr received a B.A. in Administration Management from the University of Northern Iowa in 1980.

Mrs. Mazzocco has been active in community and church life serving in various capacities. She served as president and vice-president of the congregational council at Christ Lutheran Church in Cumberland, Maryland, and Holy Trinity Lutheran Church and Campus Ministry, Chapel Hill, North Carolina, respectively. She also served as chair of the health cabinet at Holy Trinity. She has served as vice president of the Maryland Nurses' Association, chair of the Allegany College of Maryland Foundation Board, a member of the Board of Trustees of The Memorial Hospital, Cumberland, Maryland, and chair of the Board of Directors, Fearrington Cares, Pittsboro, North Carolina.

Since moving to The Village at Orchard Ridge, Mrs. Mazzocco has been an active member of the Residents' Association, serving a two-year term as vice president, chair of the finance workgroup, and several support activities.

Cyndi Walters was named president and chief executive officer (CEO) of National Lutheran Communities and Services (NLCS) in May 2021, assuming the position full-time in August 2021. Prior to this role, she served as chief operating officer (COO) since 2016. Cyndi has served at NLCS in varying capacities for nine years; first as a consultant before joining as chief operating officer in 2016.

Cumulatively, Walters has over 30 years of experience in the senior living industry including a strong background in strategically growing and diversifying the organization and an enhanced focus on operating as a senior-living system and leveraging its benefits and efficiencies. Prior to joining NLCS, she provided project management and advisory services to senior living organizations through Walters Advisors, LLC. She has also served in a leadership role at Presbyterian Senior Living in Dillsburg, Pennsylvania, and during her 19 years at KPMG (a global network of professional firms providing audit, tax and advisory services), spent significant time as a partner and leader of their National Senior Living Advisory Practice.

As president and CEO, Cyndi’s focus is strategically growing and furthering NLCS’ mission to honor, inspire and support choice and opportunity in partnership with older adults. Cyndi is an advocate for “aging with choice,” which means supporting older adults in making their own choices in aging, whether it means moving to a senior living community or bringing in supportive services to their home. She is also an advocate for team members across the organization and leads a team dedicated to ensuring NLCS remains a Great Place to Work® and an employer of choice for those who have a heart to serve older adults.

Cyndi is a native of the Harrisburg, Pennsylvania area and holds a Bachelor’s of Science degree from York College of Pennsylvania.