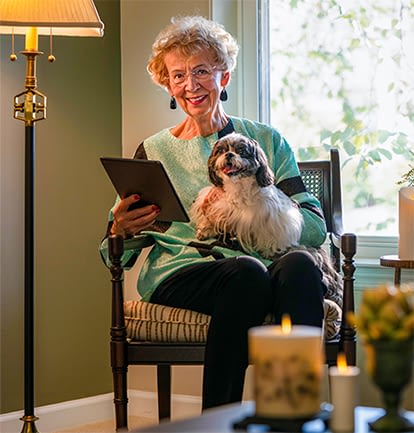 Some may think that publishing a book at age 83 may be daunting, but for Thomas Karman, resident at The Village at Orchard Ridge—A National Lutheran Community, it was an opportunity to preserve a legacy for his family and share a message with the world. His book, Thoughts on Parade, Observations From The Sidewalk, is a collection of his spirited poetic life’s work with a reminder to always have faith in God.

Born and raised in Germany during World War II, Karman wrote his first poem at 13-years-old; though his understanding of the war-torn world he lived in was limited by his youth, he penned an emotional piece titled War—Never Again. As his view of the world expanded, so did the content of his written works.

Immigrating to the United States in 1951 at the age of 17, Karman enrolled in college and upon graduation pursued a career in the emerging field of data processing. Later, he also enlisted in the United States Army Reserve where he was assigned to military intelligence and served for 21 years. 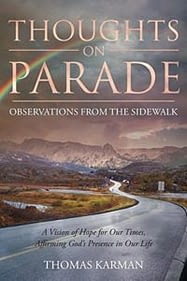 With each new experience came another poem. Throughout the years, Karman wrote odes, sonnets and more recently, limericks on his personal experiences with topics ranging from politics and faith to arts and technology. In May 2017, less than one year after deciding to compile his poetic works into a book, Thoughts on Parade was published by Christian Faith Publishing.

“I feel that our society needs to remember that God, the Creator, exists and will come into our life if we ask him,” Karman said on what he hopes readers would take away from his book. He noted that regardless of the poem’s topic, faith in God was the over-arching principle in much of his work.

When Karman is not writing poetry he enjoys a much different hobby; collecting French Art Deco glass, American Studio glass from the 1970s-1990s, and American paintings.

Whether writing, collecting or any other pastime, Karman offers this advice: “Whatever you are going to do, make sure that you thoroughly believe in it and that you are your own biggest proponent.”

Thoughts on Parade is available in paperback and digital formats on Amazon.com, BarnesandNoble.com, and in national retail and specialty Christian outlets.